Caution: Do Not Drink Your Tap Water!

Every home absolutely needs a water purifier for both drinking water and showering & bathing. No matter where you live, there are contaminants in your water. Core samples of ice at the North Pole were found to have pollutants in it.

If you live in a city, the water treatment plant is adding chlorine to your water to prevent illness from bacteria and toxic algae. Other chemicals are added for other reasons. It is up to you to remove the chemicals at the point of use to protect yourself from the serious long term effects of these poisons.

RAW TAP WATER IS "WORK WATER"
The raw water that comes directly from the tap is fit only to be "work water". Harmful chemicals and other contaminants make it unfit for drinking, showering or bathing without effective purification.

CHEMICAL COCKTAIL
Every city water department and many well-owners add chemicals to the water supply for various purposes, particularly chlorine. Fluoride is also added by cities.

Chlorine
Chlorine is a powerful poison used as a deadly weapon in World War I. Beginning in 1910 it was added to water to kill bacteria and algae. Within a few years circulatory disease and cancer, which were previously rare, began to affect the population.

Chlorine in water may have caused suffering and early death for millions over the last 100 years. Chlorine readily combines with other compounds, including natural ones, to form new harmful toxins.

For example THM's (trihalomethanes) and MX's (unknown mutagens) are present in virtually every chlorinated water supply. THM's, developed from the combination of chlorine with humic acids from decayed organic matter such as leaves in the source water, is highly carcinogenic.

MX's form from the interaction of chlorine, consumed by drinking or absorbed in showering or bathing, with various phytochemicals from plants. MX's are 170 times more deadly than THM's. These can even arise in the body from chlorine's action on food and nutritional supplements. MX's are infinitisimal, very difficult to detect, and can form with even small amounts of chlorine.

A U.S. Council of Environmental Quality study states, "Cancer risk among people drinking chlorinated water is 93% higher than among those whose water does not contain chlorine."

Fluoride
Fluoride has been added to water in major cities since the 1950's, supposedly to protect teeth against decay.  There are opposing points of view about the efficacy of fluoride, but there is no reason for putting fluoride in the water for that purpose. People who choose to use fluoride can buy fluoridated toothpaste and mouthwash.

CLICK HERE to read more about fluoride, its harmful effects, and speculation about it other reasons for it being added to our water.

Other Contaminants
Whether city or well water, the toxins from lead plumbing joints and pollution of the ground water by agriculture, industry, mining, spills, dumping and radioactivity leave your water unacceptable for consumption without purification. Glyphosate, a key chemical in the widely used herbicide Roundup, seriously undermines good health.

There could also be contamination by bacteria and/or algae, for which chlorination is the usual remedy, but it is often not totally effective.


BOTTLED WATER IS NOT THE ANSWER
Many people drink commercially bottled water. There are no standards for how "pure" bottled water should be other than occasional testing for bacteria at bottling sites in some states.

How well purified is this water? How has the equipment been maintained?

Bottled water is a corporate product for profit. Most of it is in toxic plastic bottles. They are stealing the cheap water from precious local water sources to profit from an absolute necessity while reducing the public supply.

Bottled water is subject to less testing and lower standards than even our tap water. Even disinfection is NOT a requirement for bottled water according to FDA guidelines.

A recent 4-year study on bottled water, based on 1000 bottles of 103 brands of spring water, concluded that bottled water is not necessarily cleaner or safer than common tap water.

Also, who knows what they may be adding to the bottled water?

A University of Iowa study which tested 39 brands of bottled water found that 75% of them contained chemicals, dissolved metals and other harmful pollutants. The study concluded that, "Bottled water is no better than tap water, and in some cases, even worse."

"What's sold in jugs or delivered to coolers need meet no standard higher than for tap water!  Some bottled waters are actually drawn from municipal water systems." -- Reader's Digest

Much of bottled water is spring water that is not purified at all. Some is city water filtered to remove chlorine, that still has fluoride and other chemicals in it.  According to government and industry estimates, an amazing 25-40% of all bottled water is actually just bottled tap water!

Whether purified or not, in the absence of an antiseptic agent such as chlorine, bacteria can actually grow in bottled water if there is a substantial time between bottling and consumption. How long has the water been stored in inventory?

And what of the cost? Bottled water can run anywhere from $.25 per gallon to $2 per pint. It is far less expensive and much more dependable to have your own purification system and properly maintain it for good water.

With your own pure water system you can have dependably safe water, really pure water, for a cent or two per gallon.


CARBON ALONE IS NOT PURIFICATION!
Be aware that Granular Activated Carbon (GAC), the traditional and most commonly used filter media, does not really purify water as it does not destroy or remove bacteria. In fact, it can be a breeding ground for bacteria growth when sitting for a time unused. Silver added to carbon can inhibit bacteria growth when the filter is idle, but it does not kill bacteria coming through in the water.

Nonetheless, carbon has a high affinity for organic contaminants and chlorine, and is very effective in removing these. However, if carbon is used by itself, it becomes saturated with chlorine rapidly, resulting in a shortened effective life.

In this situation, if people do not change a carbon filter soon enough, before long they are drinking water that may be as loaded with chlorine as raw city tap water!

Still, due to its superior removal of organic pollutants and chlorine, carbon is usually combined with the various methods of water purification. As long as carbon is changed often or protected by a preceding method of removing chlorine, it has a valuable role. 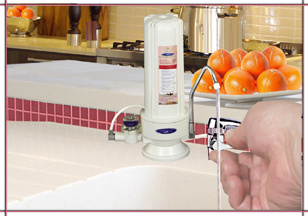 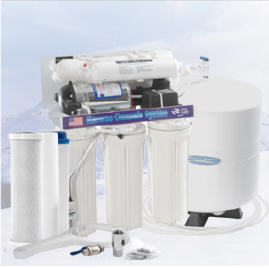